skip to main | skip to sidebar

So, I recently did a clean install of Ubuntu 10.10 Maverick Meerkat. It went really smoothly, done and dusted in less than half an hour! As it turns out, I probably didn't have to do it...

One of the main reasons I decided to do a clean install was because no matter what I did, if I had desktop effects turned on, I couldn't get a drop shadow on my panel. I know, pretty obsessive-compulsive, that just the lack of a single drop-shadow would make me reinstall, but hey. You should know by now how desperately perfectionistic I am when it comes to my desktop!

Today, I learned that I probably didn't need to do it at all.

One of the first things I noticed about my new install was that icons showed up on my desktop when I mounted external drives. Since I usually have Conky sitting on my desktop, I don't like icons because they don't play nice with the Conky window. I know there's a way to turn off desktop icons with gconf-editor, but I couldn't remember what it was, and I couldn't be bothered to look it up, so laziness prompted me to install Ubuntu Tweak. I had Ubuntu Tweak on my last install and found it really helpful, so I figured there was probably a setting in there to turn off desktop icons. And I was right; in fact, "Desktop Icons" have their own shortcut! But look what happened when I went to turn them off:

For some insane reason, when I turn off desktop icons, my drop shadow disappears! Which begs the question: if I had tweaked that setting in my old install, would I have got my drop shadow back? And whose bug is this? Compiz? Gnome? Ubuntu?

So for the time being, icons are "turned on," but I've unticked all the options in Ubuntu Tweak, so it effectively doesn't show anything.  How this will interact with Conky, I don't know, since I haven't updated my Conky yet.  I will keep you updated...
Posted by londonali1010+dragon_1930 at 13:10 5 comments:

Hi all...Well, after a short hiatus for the purpose of procreation (I gave birth to my second child, Dakota, back in August), I am slowly getting back into customisation. Slowly! First things first, I changed my wallpaper! (And slightly tweaked Conky, but I bet you won't be able to tell.) Here's what my desktop looks like now, using an old wallpaper from fiftyfootshadows.net, one that I'd forgotten how much I love. 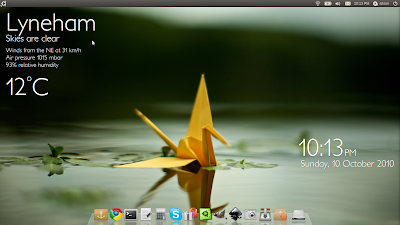 I was recently inspired by the following picture of a new Asus Tablet computer: 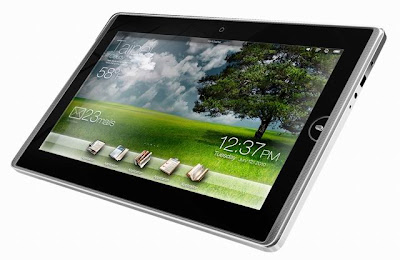 I liked the simplicity and functionality of the top toolbar, the eye-candy of the bottom launcher bar, and the big, easy to read desktop info. Instantly I was reminded of some of my older Conky configs, before I got into Lua/Cairo/imlib. Remember this one? 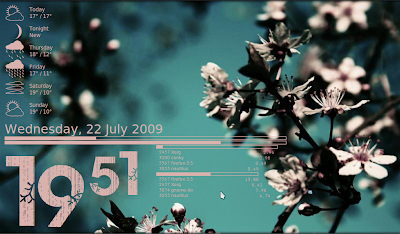 Anyway, I thought it was about time to go back to the roots of Conky. After all, more "active desktop" information is being used these days as netbooks and tablet PCs infiltrate the market. We don't have as much screen real estate as we used to, so the space we do have has to work harder. Plus, with the increased focus on location-based applications (e.g. Foursquare, Gowalla, etc.) and smartphones, we expect to see different information on our computers, like the weather.

While Conky is still considered to be an "expert's" tool for Linux, it remains arguably the best, most customisable system monitor. Add to that the fact that it is continually integrating new features, like weather forecasting, RGBA support, and more, and Conky has the potential to be the go-to application for displaying active desktop information on Linux boxes of all varieties.

Beyond the Conky, my aim this time around was to make an attractive desktop layout using as few "customisations" as possible. In this case, I used the stock Ubuntu "Ambience" theme as a base, a Conky with no external scripts whatsoever, and a minimal amount of customisation, to get the following: 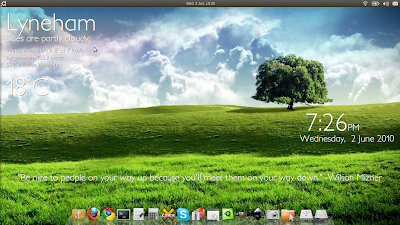 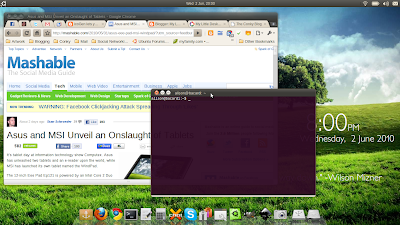 The elements I used are:
...and that's it. Other personal changes I've made that you might notice are that I use Chrome browser (with the Ambience theme installed) and that I've changed my pointers to be the Oxygen ones from KDE. Not making these changes probably won't affect the overall look of the desktop much! I also add Compiz, so I can have wobbly windows. Don't hate me.
Posted by londonali1010+dragon_1930 at 12:38 2 comments:

Mark Shuttleworth, Canonical CEO, has today given us a glimpse of what the controversial future of the window titlebar might look like in Ubuntu!

The heroes of the story are what are being called "windicators", e.g. indicators within windows. When I first read it over on OMG! Ubuntu! I thought, "Hang on, they'll be putting wind direction indicators in Ubuntu?" But I digress...

I, for one, am excited by the idea. I don't know how it will eventually get fleshed out, but I'm fairly certain that it will be awkward for a few releases, with the first iteration showing up in Maverick Meerkat (10.10). As with all new technology, it will take a few muddles and scuffles before it really shows what it can do.

But the bottom line is that "windicators" sound like a great new idea, of which there seem to be a distinct lack these days, amongst the major OSes. This has the potential to be one of the great features that make me proud to be an Ubuntu user.
Posted by londonali1010+dragon_1930 at 12:36 1 comment:

If any of you out there are Ubuntu fans like me, you'll be over the moon to read Jono Bacon's announcement about Ubuntu's rebranding! Here's the short version: the colour palette has shifted from brown with orange accents to a lovely aubergine with orange accents, and the whole visual style has been designed around the theme "light". Some hardcore Ubuntu-ites are already crying out for the loss of their beloved brown, but I for one see the change as welcome, and the look overall is more professional and polished than before. The new colours and style make Ubuntu look sleek and modern, and will help promote its position as one of the "big" mainstream operating systems.

Here are a few shots from the branding wiki page (which at the time of posting was only intermittently available, due to "technical constraints or capacity issues"!): 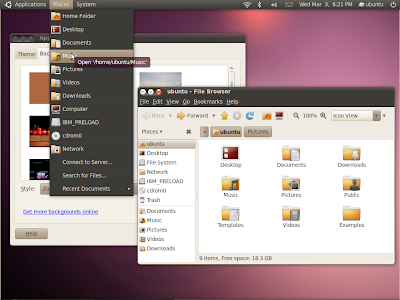 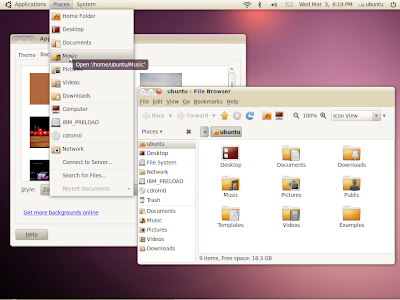 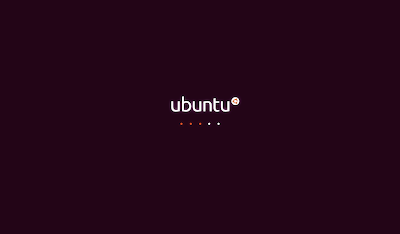 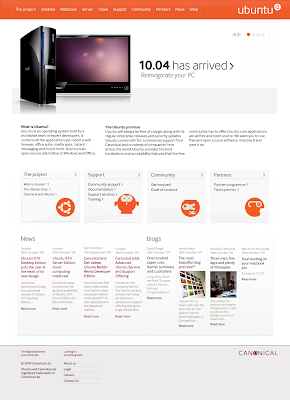 Links To My Stuff